Overview Looking for some special things to do in Side, Turkey or nearby locations? Spend magical 3 days exploring the fascinating rock formations of Cappadocia in our unforgettable tour! Highlights..

Looking for some special things to do in Side, Turkey or nearby locations? Spend magical 3 days exploring the fascinating rock formations of Cappadocia in our unforgettable tour!

60 million years ago, the volcanic mountains of the region, Erciyes, Güllüdağ and Hasan Mountain began to form Cappadocia with volcanic lava erupted. Today, 3 mountains are not active, but Cappadocia is quite active as a place worth seeing. Today Cappadocia is one of the world’s leading balloon tour centers.

The civilizations created by people who lived hundreds of years ago, a mystical atmosphere dating back to the early years of Christianity, the symbol of the resistance of faith against oppression, starts in Aksaray, which is decorated with underground cities, churches and monasteries, passes through Nevşehir and Niğde, and ends in Kayseri. All these lands are known in history as Cappadocia. But the most beautiful examples of this region, the most surprising views around Nevşehir. Ürgüp, Göreme, Ihlara Valley, Zelve, Avanos hosts the most spectacular geography of Cappadocia.

Cappadocia will fascinate you very deeply!

Cappadocia , which is a world wonder, is an excellent picture drawn on the earth’s surface by the nature!

Cappadocia is the UNESCO World Heritage site and Cappadocia, in other words Katpatuka means the Land of Beautiful Horses.

Set deep in the heart of central Anatolia, this region is underlain by majestic rocks formed in lakes and streams and by deposits that erupted from ancient volcanoes approximately 3 to 9 million years ago.

The fairy rocks of Cappadocia near Göreme eroded into hundreds of spectacular pillars and minaret-like forms. Carved into houses, churches and monasteries by the people of the villages at the heart of the Cappadocia region the soft rock volcanic deposits are a marvel to observe.

Our Cappadocia tour will bring you to the caravanserai built on the ancient trade routes as well as to the underground city of Saratli Kirkgöz. Spend a day exploring the rock houses at Uchisar castle and pigeon valley, which is full of dovecotes. While travelling to Cappadocia observe Cavusin Village rock houses and rock church and pay a visit to the onyx workshop and handicraft carpet production centre.

Hotel pick-up in Side, followed by transfer to Taurus Mountains in the Alpine belt of Central Anatolia. In about 1,5 hour after breakfast you will visit the Mevlana Museum at Konya City. Next stop is the Caravanserai and the underground city of Saratli Kirkgöz. Arrive in Cappadocia and check into hotel for the evening.

Spend the day exploring Cappadocia and the Devrent Valley region. The day includes visits to the Pasabag Valley, Göreme Valley and town of Göreme, a beautiful town nestled among the fairy chimneys. After lunch travel to Cavusin Village. You have also an extra option to visit dervish show and Turkish Night Show.

Return to the coast of Side. We will visit the town of Avanos, famous for its earthenware pottery. See Kizilirmak River, the longest river of Turkey (1355 km). We will stop at a pottery centre and visit the “3 Beauties” fairy chimneys. Enjoy a lunch break at Aksaray on the famous Silk Road trade route.

This is a wonderful Cappadocia trip full of amazing scenery, rich in history and culture that you will definitely remember for the rest of your life.

In order to offer a reasonable tour price: 3-day Cappadocia tour from Side is operated in conjunction with another local travel agency.

The itineraries might be altered slightly by the guide for seasonal or other reasons. Visits to some museums or ancient ruins may not be possible due to renovation work. In the very hot months of July and August, breaks and visits to open-air museums and ancient ruins may be shorter than planned.

At this tour we have several breaks for shopping with local handicraft productions centers. 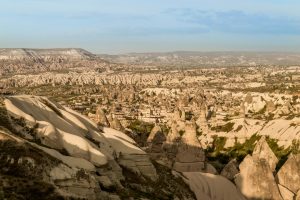 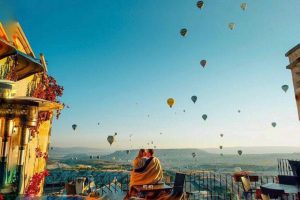 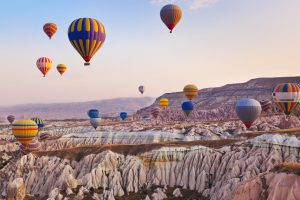